I haven’t posted much in a long time, and it’s not just because having 5 children keeps me so busy (though it does) or because having them all at home because we homeschool keeps me so busy (though it does), no. It’s because for several months we’ve been preparing, for various reasons, to uproot and move away from our home in Israel all the way to the other side of the world.  Back to the good ‘ole USA.

Oh, we’ve had adventures on the way here.

Just the amount of decluttering we did in an attempt to simplify our lives was tremendous.  Wanna know how to throw a super-good house sale? I can tell you!

Wanna know how to take 5 young children on an airplane for many, MANY hours? I can tell you.

So, we made it. From Jerusalem to sunny Florida, we made it. We don’t know how long we’re staying, but we’re up for more adventures along the road.

So, I’ll share any health-related or family-related issues I find (as I have time to ha HA), as well as just those things I’m noticing that are either different than how I remember them to be, or just different from how they are in Israel.

Which will always be our home. 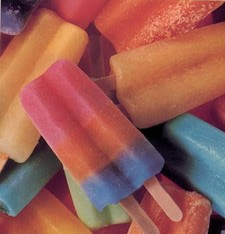 However uncommon it may be in the US to eat a little more healthfully, it is much more uncommon here (in Israel). The more recent “back to basics” way of thinking hasn’t permeated the lifestyle here, and many folks haven’t even heard of things that in the States are commonly accepted. Example: sugar is bad for your body.

My two older boys were invited to a friend’s house to play. Before they left, I reviewed the rules with them: remember manners, no TV or computer games, and eat only fruit or vegetables and drink only water. They know the drill, they understand. They’d already had a snack and would be coming home for dinner, so it’s not like they were hungry.

About 15 minutes after my boys would have arrived (they walked), I received a phone call. In Hebrew (of course). My Hebrew is NOT good. So it sounded something like this, to my understanding: “I want to give the kids an Igloo. OK?” Now, I know they have a sugar filled popsicle here they call “Arctic”, so I figured it’s probably something like that. So I said, “No, it’s not ok.” She said it’s just water. I said no, it’s water and SUGAR. She said it’s hot, they’re hot, they want something cold. I said, “so give them water with ICE.” She said ok, she’ll just give them water.

Well, that was what I understood.

After the boys came home, they said she had basically insisted that they take it.

I was frustrated. It’s not that some sugar is that big of a deal. It’s that some sugar every day IS that big of a deal. We eat sugar. The processed kind, usually in a yummy dessert I make once a week. The kids eat cake and ice cream at parties. But it’s not a daily thing, and I know that if I am not very clear with the mothers at other houses they might visit, it will turn into a daily thing, and I can’t let that happen.

A few days later, I saw the other child’s mother and (attempted) to talk to her about it. It went something like this:

ME: What happened the other day with the Igloo? I thought I told you that they could NOT have it.

HER: It’s OK, I gave them water afterward.

ME: HUH? (I think it’s the same in all languages) I don’t understand

HER: What’s the big deal?

Typing like this is kind of annoying, so I’ll just paraphrase.

I said that the big deal was that it had SUGAR. And she said that she’s a (dental)hygienist, and so she knows about sugar and that it’s ok because she gave them water afterwards.

This is where I really couldn’t believe how many people still DON’T KNOW HOW BAD SUGAR IS FOR OUR BODIES! I told her that sugar really hurts the immune system. I told her that in our family we only eat sugar 1-2 times per week, and maybe at a party or something special. But that we don’t have it every day and that I can’t let my kids go play at houses where they are going to be fed it.

She looked at me like I had six heads. And asked what about when it’s hot, can’t they have something cold?

I explained that of course, we eat things that are cold. I make popsicles in molds out of real juice. And that the children enjoy it just as much.

And that was about the extent of my Hebrew.

Have you ever had an experience trying to explain to someone what you were doing and they just didn’t get it? 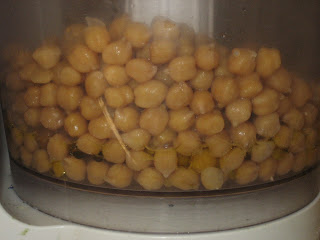 If you’ve never tried Hummus, you’ve been missing out. Hummus is a Mediterranean dish made from pureed chickpeas (garbanzo beans.)It’s delicious on sandwiches or as a dip for veggies. There are many varieties and flavors; if you don’t like it one way then that only means that you haven’t found “your” secret ingredient.
The basic ingredients are:Cooked Chickpeas,Garlic,Olive Oil,Lemon Juice.
Israelis add Tahini, which is a paste made from sesame seeds (like peanut butter, but from sesame seeds). Tahini is a critical ingredient to Israelis; I don’t like it, and I make my hummus without it, like the Greeks do.
I can’t give you an exact recipe because I don’t use one; I just:
1)Put my cooked chickpeas in the food processor and add:
A garlic clove
Some lemon zest, and juice of 1 lemon
Salt
Cumin (optional)
Blend till smooth, adding water as necessary, tasting and adjusting seasonings.
Variations include: Adding roasted peppers, fresh herbs such as cilantro, dill, or parsley, cayenne pepper for a little kick. Be creative! There are many things you can do, it just depends on your taste.
For a nice presentation, spread the hummmus on a shallow dish, with an “edge” higher than the rest, and a slight depression in the center. Sprinkle with paprika and drizzle with extra virgin olive oil; add some olives if you’d like.
I serve this with Roasted Eggplant and Couscous Tabouli Salad, with pita bread for dipping or making sandwiches.
Here is a video showing the basic steps for making Hummus. It’s not my video; I don’t use all of the same ingredients. But it shows the main idea and what it should look like when you’re done. Because there are so many variations, you can take some, all, or none of the ones shown here.
Enjoy!

Living in Israel offers many differences to living in the US. Being here this long, I have begun to really appreciate the flavors of Middle Eastern cuisine.

Most tabouli is made with bulgar wheat; I prefer the taste of the couscous. I had just been introduced to these types of foods before moving here; they are healthful, and neither expensive nor difficult to prepare. I’ll add recipies for the accompaniments as I can. 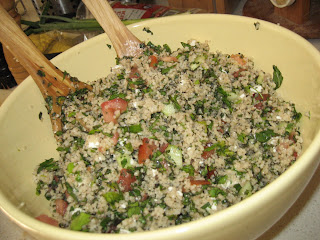 2 large cucumbers, peeled, seeded, & finely chopped
3 medium tomatoes, seeded and finely chopped 1 bunch fresh mint leaves 1bunch fresh parsley approx 4 tbsp. extra virgin olive oil
1/2 cup crumbled feta cheese
Fresh lemon juice (about 3 lemons’ worth)
Salt & pepper
1. In small saucepan with tightly fitted lid, mix DRY couscous with 2 tsps extra virgin olive oil.
2. Add 2 cups boiling water to couscous. Immediately cover and let stand 5 minutes.
3. After 5 minutes, fluff with fork, and leave uncovered to cool.
4. In the meantime, in large bowl, combine chopped tomato, cucumber, and garlic.
5. Finely chop mint (separate from stem) and parsley leaves. Note: I have tried to use the food processor for this to save time, but was not satisfied with the uniformity and size of the results. If your food processor is better than mine, go for it. Otherwise, I find it worth the effort to chop by hand. Add to bowl.
6. Add couscous, and gently mix to combine
7. Add olive oil.
8. Add lemon juice, salt, and pepper to taste. Cover and chill. 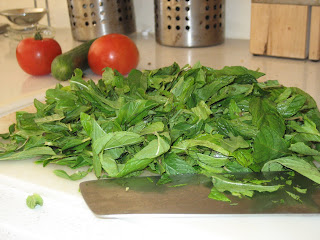 9. Add crumbled feta just before serving.
I serve this together with homemade hummus, roasted sliced eggplant, and labana cheese (similar to yogurt) along with olive oil for dipping and some nice bread or pita. Yum! 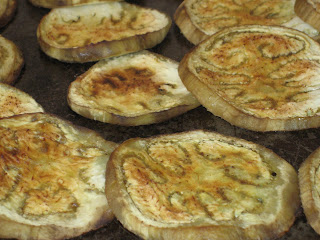