Non-stick coated pans have always been in my kitchen, for as long as I can remember.  Have you ever tried to cook on anything else?  For many years, I had never even seen a non-non-stick pan….and the first time I experienced attempting to fry an egg on one ( I think it was stainless steel), I vowed never to do it again, if I could help it.

And then I learned about health.  And toxins.  And how toxins affect  your health (I mean in a negative way, of course).  And I looked at my non-stick pans and pretended I didn’t know that my food may be poisoning me just for the fact that I’d cooked it on Teflon (actually called Polytetrafluoroethylene or PTFE.)

Now, according to Wikipedia, Teflon does not begin to break down and release these toxic chemicals until it reaches 500F.  However, the EWG (Environmental Working Group) states, “In two to five minutes on a conventional stovetop, cookware coated with Teflon and other non-stick surfaces can exceed temperatures at which the coating breaks apart and emits toxic particles and gases linked to hundreds, perhaps thousands, of pet bird deaths and an unknown number of human illnesses each year, according to tests commissioned by Environmental Working Group (EWG).”

Now, I’m not saying that using Teflon coated pans is the thing that’s most harmful in your life and that you should concentrate on changing your cookware ahead of  making other changes, such as avoiding aspartame, high fructose corn syrup, or MSG.  It isn’t.

However,  I’m all into getting back to basics lately.  I’m reading through the Little House On The Prairie books with my kids, and I just love the idea of going back to the way things used to be (not that I’m about to give up my Kindle or decide that I no longer want an iPhone or an iPad).  I want old fashioned skills, and as part of my living simply and owning intentionally, I want to have quality items that will not only last, but can be used in a variety of ways.  And if the thing can be used in a survival/off the grid scenario, all the better.

And did you know that cast iron IS non-stick if it’s seasoned properly?  Another bonus is that bits of iron make their way into your food and into your body, helping to protect you against anemia, which for most people is a good thing.

I was a little intimidated by the whole “needing to season the pan” thing, and then I saw this brand of cast iron that comes already seasoned, ready to use.  I’d been thinking about it more and more, especially when I tried to make my whole wheat pancakes on the skillet that’s in the new place where we’re staying, and had a really tough time due to the fact that the pan was completely warped and the batter kept running all over the place.  So when I walked into Target and saw it for sale for under $20, it was a no-brainer.

I wonder what Ma Ingalls’ favorite thing to cook on hers was.

I love kitchen gadgets.  And yet, I do show restraint when it comes to acquiring them; I know well how NOT fun it is to have drawers and cabinets that are overflowing with gizmos you use only twice a year (sandwich maker and fondue set) and some which you’ve used….never (deep fryer) but don’t want to let go of just in case you have an A-list guest who simply MUST have fresh, homemade potato chips.

We’ve moved now, and in all my decluttering I DEFINITELY took to heart the concept of owning intentionally. I want to only have things which I will really use (preferably often or in more than one way), and also those which are easy to store or travel with. And if it doesn’t use electricity, that’s an added plus.

I’ve seen these old fashioned mortar and pestles, and always wondered what they were used for and why they were necessary….I mean, if you have a food processor, Vitamix, or even a garlic press, why on earth would you use one of these?

Well, I’ll tell you.  I don’t know.  But I just bought a simple wooden one and I’m excited to use it tonight in the only recipe I have that calls for one: Cuban Black Beans.   It says to crush the garlic with the salt and pepper in this way; I’ve always just chopped it and I’m sure that’s why the dinner has always been only excellent….now it will be FANTASTIC, I’m sure.

In researching now, I see that the wood is highly absorbent, and it might be better to get one made from another substance.  I thought that might be the case, but this one had the right price.  If I really like it and use it, I’ll upgrade.

Here’s a great video of Jamie Oliver teaching how (and why) to use one.  Great info.

But until then, I’m happy to use this one.  I really do like simple, old fashioned things.  Not that I’d give up my high-tech gadgets, mind you.

What’s one of your favorite gadgets (kitchen or otherwise, simple or high tech)?

On Day 13 of Flylady’s babysteps, we are to choose one of Kelly’s missions and do it.

I love the way this is done. Each day, Kelly sends out one “mission” to accomplish. It’s something in the current zone, and usually will take less than 15 minutes. By dividing the house up into 5 zones and focusing a little extra time in it each day for the week, our houses can stay reasonably clean without much effort.

I need help with this. Just like regularly doing the 15 minutes of decluttering, I struggle to get it done, even though it really only takes a few minutes.

But they really do work.

This is a link to Kelly’s missions; they are posted daily and remain for the week.

This past week we were in the Kitchen zone. My favorite mission from that zone is the deep wipedown of the counter. I have a large countertop and need to spend most of that time putting things away that seem to collect there (beyond regular putting away kind of stuff), so I’ll usually do 15 mins + a little. And it might not all get done, but that’s ok.

I won’t get blown up if I don’t get it done! 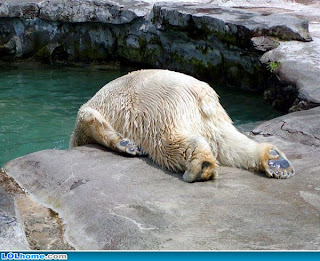 Sometimes I don’t shine my sink. I don’t finish all of the cleanup at night. Most days I do, but on Saturday night, after a full day of relaxing and spending time with my family (which causes lots of extra dishes & stuff), my hubby and I like to have a movie night. And when it’s already late and we don’t want it to get any later, I leave things out.

Oh, I’ll pack my dishwasher, and put away any food that’s out. And even do an extra 5 minutes on top of that.

This is where I found this funny photo. 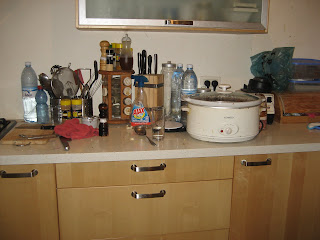 I woke up to this today. I call it my Kitchen Hangover. 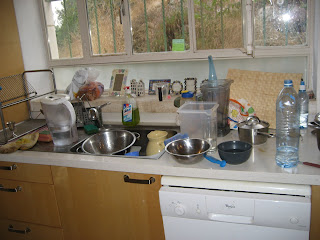 It’s a good thing I know how to use my timer. I’ll go as fast as I can for 15 minutes and see what a difference I can make.

15 minutes really does a lot.