Dont’cha just love having dinner already simmering along waaaay ahead of time? I do. In order to accomplish that, I employ one of my favorite indentured servants, my crockpot. (Ironically, at the time of this posting, my crock pot is out of service. Good thing that this stew can also be made on the stove).
Using a slow cooker is extremely helpful for anyone who just doesn’t want to deal with prepping dinner at the time when that would normally be done. This can be wonderful for those of you who either work outside of the home, or are busy at that time taking children to or from activities. You can throw everything in at breakfast time, turn it on, and walk away. It’s that simple. During the summertime when you want to keep the house cooler, you can even put that cooker outside on your porch, and during the winter it sure helps warm things up. Yummm. I am craving it now.
And at some point when I begin making meal plans ahead of time again like I know is helpful to do, I will definitely plan this one in. Here it is.

Layer ingredients in slow cooker in the order given; pour in water. Do not stir ingredients. Cover and cook on HIGH 4 to 5 hours or on low 8 to 10 hours until peas are very soft and ham falls off bone. Remove bones and bay leaf. Mash peas to thicken more, if desired. Serve garnished with croutons. Skip the croutons and you can consider it gluten free!  Freezes well. Serves 8.

Do you like cream of tomato soup? I do! Of course, the best way to make it taste great is by adding lots of CREAM. However, most of us don’t want all those calories, and those of us who want to avoid dairy products also would probably decide to just go ahead and…..skip the creamy-ness.
Never Fear, I Have The Solution.

Here it is: A fantastic creamy tomato soup that is basically dairy free!

Here’s the recipe (for a huge batch, halve it for a normal size family)

juice of 2 lemons (added at the end with final seasoning)

Cook till potatoes are soft, then blend solids. Voila! A creamy, delicious tomato soup w/o dairy (other than the butter)

Of course, add salad and fresh homemade whole wheat bread, and you’ve got yourself a first class meal! 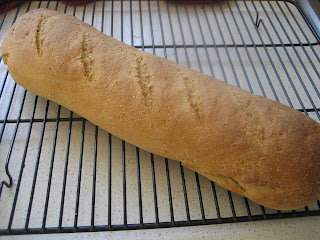 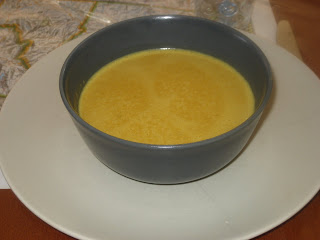 This is one of my favorite soups. It’s very rich, so I don’t make it very often. But the flavors of these ingredients combined are amazing. I first found the recipe here and it was an instant hit. I’ve made a few changes/substitutions, and as always, with soup, am not too specific with measurements. I’m attempting to measure so that I can write it down for you here. 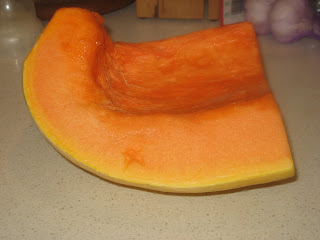 1 large piece pumpkin (5 cups chopped)
2 large onions
3 cups chicken or vegetable stock
2 cans coconut milk (of course, fresh would be the best)
8 Tbsp molasses or 1 cup black rum (I’ve tried both; I prefer the molasses)
1 stick butter (you could substitute oil, I’m sure. I haven’t tried.)
Zest and juice of 2 large lemons (limes would be better)
1 Tbsp (approx) of curry powder
Kosher salt and pepper
2 bay leaves
1/3-1/2 white wine
*brown sugar — you can substitute a little extra molasses and honey. About 1/2 c or to taste. 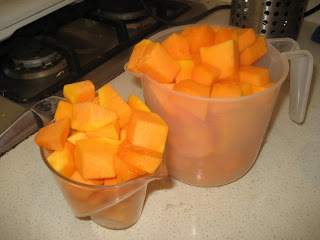 You will need 2 pots.

1.Pot 1: Boil pumpkin chunks with stock, rum/molasses, and water if needed to cover until very soft.
2. Pot 2: Saute sliced onions in butter or oil until soft. Add coconut milk, lemon juice & zest, curry, honey, bay leaves. Simmer about 1/2 hr.
4. Combine all and blend or puree
5. Taste and adjust seasonings and thickness (you can add more water or stock or wine or…) 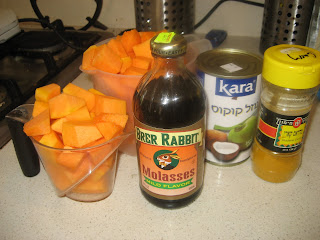 Soup is a very forgiving dish. You can really play around with ingredients and amounts; feel free to experiment! I don’t have any white wine today and am making it without it. Never think you can’t make something unless you have all of the exact ingredients.

Serve it up with some freshly baked french bread, a salad, and enjoy!

I love making soup. It’s an easy to make, filling, and inexpensive meal. And the variations are endless. I usually don’t follow a recipe for soup, but just take the ideas of the ingredients and then run with it. This is an exception. I tried this recipe and loved it so much that I don’t want to change a thing. Except that I switched from white rice as originally called for to whole grain. And since there are also chickpeas in the soup, you get a complete protein.

Add a salad and/or some fresh homemade bread, and you’ve got yourself a fantastic meal. Remember “The Soup That Eats Like A Meal”? Well, this one does. Only without the MSG and bad food combining.

The recipe was adapted from The Occasional Vegetarian by Karen Lee.

5 c vegetable stock or stock of your choice ( use my easy chicken broth, stored in frozen 1/2 cups)

It’s REALLY good. And very easy to make. And filling. And has unique flavors….Can you tell that I really like this soup?

Tell me what you think of it!